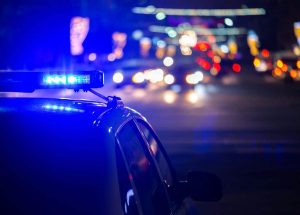 The blue-light protocol is a procedure developed in 2013 by the Justice Project South Africa (JPSA) and the Road Traffic Management Corporation to protect people against false law enforcement officers  in disguise. These criminals use easily obtainable blue lights and other police equipment to pull over innocent citizens and then to attack, rob and even murder them.

According to this protocol you do not have to stop immediately when a police officer signals you to pull off the road in the middle of nowhere. You should do the following: reduce speed, switch on your hazard lights, indicate to the blue-light vehicle to follow you and then drive at 40 km/h to the nearest police station or public space with CCTV coverage (for instance a petrol station).

The problem with this protocol is that not all the law enforcement authorities allow this procedure and therefore handle innocent people roughly, even violently, if they try to follow the blue-light protocol. There have even been incidents where innocent motorists were shot by the traffic officer or even killed by a policeman in such a situation.

The purpose of the blue-light protocol has been dragged through the mud by authorities that do not know how to apply the protocol. Small wonder therefore that the JPSA decided to withdraw its approval.

So, what to do if you feel unsafe? In terms of the National Road Traffic Act a motorist is expected to stop immediately for traffic and police officers in uniform. Motorists are advised to immediately call 10111 to verify the authenticity of the police vehicle that wants him to stop, and then to flee if anything goes wrong.

This does not sound like an effective solution to combat criminal behaviour, but rather like ten steps backward. There is, however, talk of a new, more efficient procedure that will hopefully be developed and announced as soon as possible, and hopefully this time round everybody will get the memo.