WerkNet
Your Family
Your Career
Your Health
Your Money
You and the Law
Occupational Guilds
Solidarity Youth
S-Leer
Home › Articles › Covid-19: May my employer force me to be inoculated? 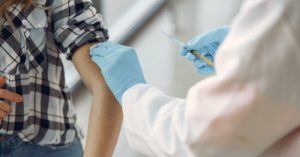 Given the serious effect of Covid-19 on the South African population, the lockdown regulations imposed by the government and also the delivery of the first vaccine, one can understand that people will be worried about taking this vaccine.

In a media statement at the beginning of February 2021 Dr Dirk Herman, Chief Executive of Solidarity, said that Solidarity was swamped by enquiries about compulsory inoculation in the workplace. As a result of this Solidarity obtained a comprehensive legal opinion by external advocates to answer the question of compulsory inoculation. Advocate Kemp of the Brooklyn Advocates Chambers was one of them.

The legal opinion looked at legislation and various findings and regulations, amongst others the Constitution, the Basic Conditions of Service Act, the Labour Relations Act, the Occupational Health and Safety Act, and many more.

Our current frame of reference does not specifically provide for medical interventions such as inoculation against diseases. However, our legal system does compel every employer to create a safe work environment for all its employees. The definition of a “safe” work environment will depend on various environmental aspects of the workplace and will in any case differ, but will include the vulnerability of the employees and also the nature of their interaction with people from outside the workplace. The employees must, however, be consulted about the planned inoculations and this is part of the compliance process.

On the other hand an employee’s constitutional right to physical integrity was taken into consideration. This is a very substantial right but will be difficult to uphold out of court. Employees are further protected against unfair dismissal on the grounds of discrimination on the basis of religion and political persuasion.

According to the legal opinion obtained it is clear that employers will still be able to create a “safe” work environment in compliance with the Occupational Health and Safety Act without making inoculation compulsory. According to Advocate Kemp it is highly improbable that an employer could legally and unilaterally compel its employees to be inoculated.

However, Advocate Kemp is of the opinion that it could be possible to convince a court that for the duration of the pandemic inoculation could be an “inherent requirement” for certain types of work, especially in the case of health-care and health workers. In the absence of a government policy and/or legislation employers are advised to consult employees before steps are taken.

The legal opinion made it clear that any unilateral decision to make inoculation in the workplace compulsory will not be upheld in a court and would be illegal. While certain proponents of compulsory workplace inoculation like to claim that the employer has this right in terms of the Occupational Health and Safety Act, the Act does prescribe a proper consultation process with an employee and all possible remedies must first be exhausted before an employer may take drastic steps.

According to Dr Hermann it would “simply be illegal for an employer to compel an employee to be inoculated and it could even be argued that it would criminally and constitutionally infringe upon every individual’s personal right to physical integrity.”