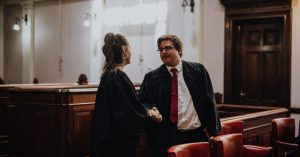 In the Northern Gauteng High Court in Pretoria the claimant, Mr van Wyk, filed a claim for construction work that he had performed for a large company. On the day of the hearing in the magistrate’s court Van Wyk’s attorney withdrew from the case and he represented himself. The magistrate found that Mr van Wyk had executed the work properly and also that he was an excellent witness. The magistrate also found that some testimony by the Defendant was unacceptable and even false. The magistrate thereafter rejected the large company’s entire defence and pronounced judgement in favour of Mr van Wyk, including interest and costs.

The large company lodged an appeal and at the Appeal Court Mr van Wyk once again represented himself. On appeal there was a number of interesting legal aspects that needed to be considered. The company alleged firstly that Van Wyk accepted an amount of approximately R19 000.00 in full and final payment for all the work he had performed. They also presented a document that showed clearly in writing that he had accepted R19 000 as settlement. However, Van Wyk informed the court that he had signed this document under duress and that he had been improperly influenced by the company. If he had received the document under his normal volution, he would definitely not have signed the document.

The testimony was among others that Van Wyk and the representatives had met on a certain day to discuss the retention amount of approximately R48 500.00 due to him. The company arrived and handed him the settlement agreement of R19 000.00. In this it was clearly stated that should he not accept this, they would pay him nothing. It would therefore mean that his employees would also not receive anything, after they were already going through hard times and he was under pressure to pay them.

It is this bullying tactic from the large company that was placed under the magnifying glass in the Appeal Court. The court was of the opinion that Van Wyk was not bound by the settlement agreement and was still entitled to proceed with his claims against the company.

The company’s appeal was rejected and Mr van Wyk’s claims were upheld. He could now receive the money in arrears from the company, together with R100 000.00 in damages.